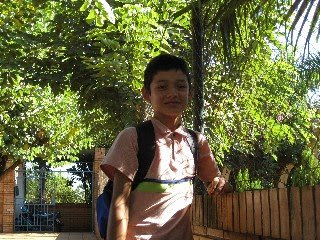 Yesterday I dropped Jorge off at his new school, almost an hour and a half from his home in Bella Vista. He had a permanent smile on his face the whole morning. I brought a few things for Jorge, like shampoo, soap, a few hand towels, a sheet and pillow, because the family didn't have extras to spare. Hi mom made his bed and arranged his clothes on his small nightstand. We hung his mosquito net just like all the other ones in the boy's dorm. He was elated. We met with the director, the Mother Superior of the Catholic school, the only school for deaf children in southern Paraguay. She welcomed Jorge with a big hug.

We walked into his classroom and Sister Eliadora shook his hand and showed him to his seat. I was nervous that he would feel out of place starting first grade as a 12 (almost 13) year old. Much to my relief, his 2 other classmates are 11 and 12! The only thing Jorge knows how to do is spell his name. He can't even write his numbers to ten. Then the director told us that we should go and that we can pick him up on Friday at 11 a.m.

Jorge_002Then I saw Jorge's dad (Jorge Sr.) clutch his son and weep. His mom kissed him and wept, then his younger siblings. I got teary-eyed myself just thinking about the mixed emotions this family was facing. On the way home we talked about how excited they are for their son to start his education and thus have a future. However, it will be a huge adjustment. He has never even been away from home one night. Since Jorge knows how to count on his hand, they explained earlier that he would go to school for 5 nights and then go home for 2. He looked at his family reassuringly and showed them 5 fingers almost saying, "Don't be sad, we'll see each other again in five sleeps!" If you think about it, would you pray for Jorge and his family this week.

This experience really got me thinking about the day my son goes to kindergarten, then to high school and off to college. These mile-markers are huge transitions, but necessary. Ultimately, our goal as parents is to raise loving, responsible children that are ready to face the harsh realities of the world and stand triumphantly. If we never let them go, they will never be able to stand as victors. Proverbs 22:6 says, "Train up your child in the way he should go and when he is old, he will not turn from it." That is certainly our hope, prayer and responsibility.

The director jokingly asked if Timmy would be staying too. "Not on your life" I thought. I know I will eventually need to let my little boy fly, but right now he's secure under the safety of mommy and papi's wings. The time for Timmy's first day of school will come all too quickly and we have many miles to go in teaching him God's ways.

Popular posts from this blog

December 23, 2009
If you're wondering what Paraguayans do at Christmastime, they have some great traditions, including the "noche buena" meal on Christmas Eve at midnight.  They eat lots chipa guasu (a type of corn casserole, stay tuned for a recipe), asado or grilled meat (some eat it cold), salads, especially fruit salad, watermelon and drink mucho terere.


Families travel from all over the country, many even return from working in other countries like Brazil, Argentina, and Spain, to celebrate with loved ones. This is us at last year's Kurrle celebration in Asuncion. Festivities are anything but a silent night with fireworks, loud music and drinking cidra (hard cider).

Most Paraguayans do not decorate Christmas trees (we decorate ours in shorts!) or emphasize Santa Claus.  Instead, they put beautiful nativities "pesebres" in their yards and in store fronts.  Kind of novel to focus on Christ at Christmas, isn't it!


To beat the heat, many Paraguayans go to a river to rel…
4 comments
Read more

The Genesis of my story in Paraguay: Part 2


At the time I had just gotten married to my college sweetheart Julie. We were both enrolled in seminary, enjoying just being married and going to school. Among our hobbies at the time was traveling the U.S. and to any country that we had the funds to go to. During those days, we began running seriously and trained for our first marathons and adventure race. Our first marathon was the Flying Pig marathon in Cincinnati, Ohio. Julie and I finished together in what I thought was a pretty good time of 4 hours, 12 minutes.


One day, a letter in our mailbox got us thinking about plans beyond graduation. The letter was from Walter Franz, inviting us to help establis…
Post a Comment
Read more

February 25, 2009
On Valentine’s Day, we had the joy of attending the wedding of Sandra and Anastacio, young leaders in the church. Sandra is my assistant with Children of Promise and Anastacio, apart from his carpentry job, has a popular youth-focused radio program every night at 8:00 on our station.

We’ve been to quite a few weddings, and these are some of the uniquenesses of southern Paraguayan wedding celebrations from our North American culture:

1. Nothing is fancy. Emphasis is placed on the act of marriage and not on the decorations or food.
2. It is not an expectation that parents help pay for expenses. Most families just make it each month with regular expenses and cannot afford to pay for eleborate feasts. Most couples have to spend months saving for their own wedding.
3. Borrow as much as possible. Many times wedding dresses are borrowed 5-10 times, because few women can afford their own. Flowers, decorations, shoes and ties (Norb loans out his ties often...since he never wears them!) are …
3 comments
Read more